Growing up, my dad was a principal at a Catholic elementary school in Farmers Branch, a suburb of Dallas. He served in that role for 25 years, the longest in the school history and I’m sure the longest in most schools’ histories.

When I was in middle school, my dad went to a personal growth conference in Salt Lake City. This was his first of many, and it was held by H. Stephen Glenn, the guru behind the positive discipline parenting movement. This was my dad’s awakening: he knew he needed to be doing bigger and better things.

Within a few years, he decided to go back to school to get his second masters in counseling, became an LPC, went to more personal growth conferences, became an expert at True Colors personality tests, dove into the Enneagram and every psychology book he could get his hand on, held workshops on parenting all around Texas, the US, and even in Central America. He eventually quit being a principal to pursue his true passion: helping others with their parenting styles, and helping people find their true paths in life. He is currently a family counselor; a personal growth, psychology, and parenting author; and a college professor in Dallas. He’s currently working on his second – yep, second – doctorate. He turned 71 in January.

The apple does not fall far from the tree.

Personal growth is pretty much the main thing I am into, and that comes for me in many, many shapes: yoga, meditation, eating well, adding movement to my life every day, the Enneagram, the 5 Love Languages, TED Talks, self help books, this blog, you name it.

It wasn’t a personal growth conference that woke me up, and I don’t totally know what one thing woke me up, but I know fully well that I became awake sometime in 2013/2014. I began putting my new feelings into practice in 2015, and I finally quit my career in 2016.

The awakenings happen slowly, as much as I (and possibly you) want to speed them up; it’s physically not possible. When I think back on that time in my life, on knowing that I couldn’t continue on the path I was on, on knowing that I had to do more with my life, my mind always comes back to Scott Dinsmore.

I didn’t know Scott, but he died tragically while hiking Mt. Kilimanjaro with his wife in 2015. In 2012, he gave this Ted talk and it was this talk that I grasped hold of and simply could not set aside. When Scott died, I cried like I knew him. It effected me to my core. It was his story that helped me propel forward. This man, he truly lived his life: he lived his passion. He died living his passion.

And I was sitting at a desk in downtown Fort Worth and about to be moved to the 25th floor of a massive, corporate, suit wearing, business person high rise a few buildings over. I hated it. I hated it. That next year, I was walking through what would be my new office with our designer, going through paint colors and carpet selections and furniture choices: reviewing my department to see what we wanted to add, and seeing how it would tie in with the rest of the office, and I became physically ill. It was the closest I came to having a panic attack, and I knew at that moment, while riding in the elevator trying to get out of the building as fast as possible, that I had to quit my job.

A few days later, I did.

I think that’s how growth starts: you realize you’re in a place where you do not fit in, or where something just doesn’t seem right. You look around at people on other paths and you think: I want to be on that path, too. And after weeks or months or years of thinking that, you eventually get the courage to do it.

I hope you do, at least. I hope if you’re reading these words you know that it is possible to make that leap.

It is possible, and it’s worth it.

My friend Gloria visits me every summer. She and her husband are international teachers, and this year, they’re teaching in Saudi Arabia. You guys, I can’t even imagine, on any level, doing what she does. But she wanted to travel the world, that’s all: that was her main goal. As a teacher in Dallas, unless you have extra income coming in from some incredible place, you most likely don’t get to travel the world. So they both, together, applied to be international teachers. They then quit their Dallas public school teaching gigs, and with their newborn, moved to Kuwait, and then South Korea, and now Saudi Arabia. They’ve been at it for about 10 years, and you guys, they have seen the world. She knew there was no other way for her to be able to afford international trips, and so they did what they needed to do: find teaching jobs that paid more, and find jobs in unique places that would give them a launching pad for their true dreams.

I have her on my mind because: A.: Talk about following your dreams, and B.: This summer, in my Fort Worth kitchen, she asked what it was like during a period of my life when I wasn’t speaking to my dad. I got super pissed at him for a few years while my husband and I lived in Nashville. I thought he had broken our family apart, and I was very, very hurt. My whole life I had been daddy’s little girl: he’s my rock. So it was an insane difficult few years for me in Nashville, and looking back, I can see why my life got so out of hand. I can only imagine how difficult it was for him, too.

Gloria asked about this period of my life, and if I handle events now like I handled them then, and I responded: no, because I wasn’t aware back then.

I simply wasn’t. I didn’t become aware without a shit ton of work on my end. I didn’t become open without yoga or meditation or all the books and all the journaling and the really uncomfortable workshops and public speaking and vulnerable conversations. All of that, all of it combined, caused me to wake up.

And the waking up, I hope it never ends. I hope I never fall back to a place of not reaching. Reaching is where I’m happiest in life, as un-Zen as that might be.

We can’t go back in life, and I’m glad about that. And really, if I had been awake back then, today might not be as sweet. But it’s nice to be here, as frustrating as it can be at times, in a place where I’m mostly aware of my emotions and my surroundings and my choices in life. I hope, if you’re searching for a new place, that you don’t give up.

Hey guys! If you are reading this and you have not signed up for my monthly newsletter, would you mind doing so by filling out the form on the Contact page? I send it once a month on the first Sunday of each month.

Also, in honor of the month of love, I’ll be giving you all sorts of lovely new dessert and main dish recipes next month. I thought these brownies would be a great way to start it all.

With love to you and yours and the path that we’re all on,
Jen. 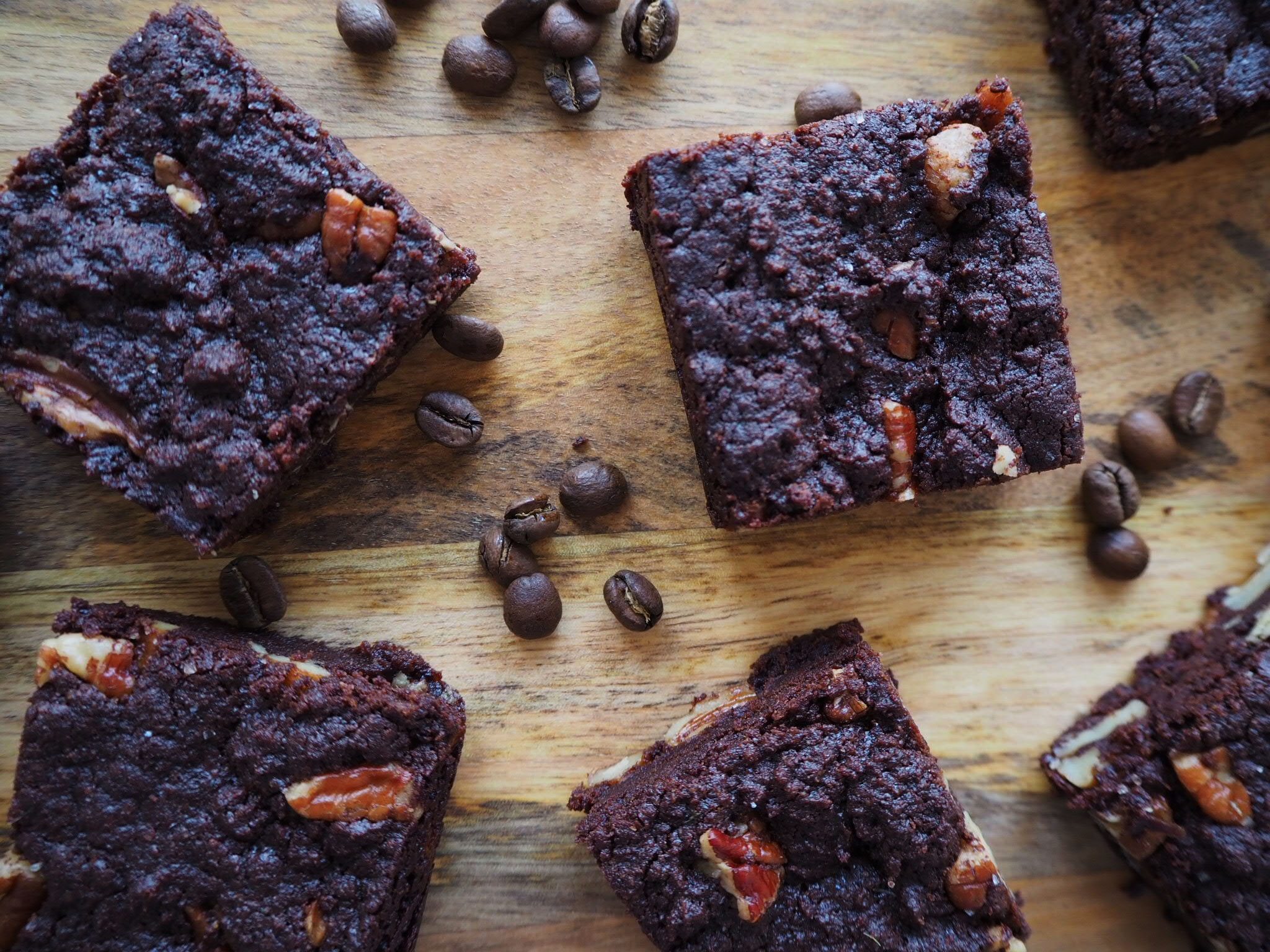 I get my coffee shipped in from Albuquerque every month from Michael Thomas Roasters, simply the best coffee I have ever, ever tasted. I am a total coffee snob. And the lavender salt, I get it shipped in from Purple Adobe Lavender Farm in Abiquiu, NM. I can't recommend either enough.
Tried this recipe?Let us know how it was!
Categories: UncategorizedTags: brownies, vegan brownies