I almost didn’t use the word Vegan on this website, as I know what it means to most people: annoying hippies and fake meats and animal loving peacemakers, and people who have a comment about the ways others live their lives. No one wants to be around those people, and so I hesitated.

But plant-based sounded worse. And whole foods was already taken.

My friend posted on Facebook last night asking for advice on some new food bloggers so she could try new recipes, and a lot of her friends made a lot of comments: some healthy, some really unhealthy. And so I commented, WTF I’m a food blogger, try my food.

And she responded: “Sorry Jen but vegan doesn’t count as food”.

And I got really, really pissed off. And told her I’d be writing about this in my next blog post. So here you go.

Here’s the deal: I’ve known her since college, she’s a great friend, and I know she was only kidding.

However, people really do feel that way, and it’s a shame, and by joking around about it, we’re all saying that vegan food isn’t real food. But it is. It’s actually as real as it gets.

I don’t eat fake meats or fake anything for that matter, for the most part, unless I’m eating at a restaurant and that is their only option. Otherwise, I eat vegetables, grains, beans and tofu; which I guess you could say tofu is fake, but it’s been around forever, so I don’t see it as fake, not in the way I look at seitan and tempeh and all the other processed “foods”. For the most part, if it comes in a box or a package, I don’t eat it. Packaged food, in my opinion, is not food. Processed anything is not food.

A few times my husband has encouraged me to not use the word vegan on this blog, as it has a negative pretense, and it excludes people who might be hesitant by that name, and I get that. I now wish I would have taken his advice.

That’s what Angela Liddon figured out, and I wish I would have followed her suit and named this differently, but I didn’t, and so I’m kind of stuck right now.

Vegan food is real food. It’s more real than animals that have been raised in a cage with no room to turn around, that have been drugged with pharmaceuticals, that have been mistreated and used and slaughtered. It’s more real than the heifer who has to give birth over and over and over again and the second she has her baby, that baby is taken away, and she’s artificially inseminated again, as soon as she can be, and then again, has her baby, and again, little to no contact with that baby. That baby is then most likely slaughtered and sold as veal, and she, after living a horrid life, is then slaughtered and sold to a local supermarket. And if you eat meat, you eat her. You eat all her worry and fear and sadness, and if you don’t realize that’s a thing, that’s fine, but there’s no denying that you are eating all of the drugs that have been put in her. You eat all the shit that someone gave to her, and god only knows what that is. THAT IS NOT FOOD. That is drugs and the remains of products not healthy enough to serve to humans. That is what you are eating.

So that, that is why I am vegan. I love animals. I absolutely adore them; more than most humans. And we treat them horribly. We use and abuse and control and kill them for nothing more than greed. And our pharmaceutical industry makes a huge profit off of it, because guess what, those animals, they are so sick that they have to be drugged their entire lives, so big pharma LOVES the cattle and chicken and salmon industries. Big pharma would not exist without animal production.

I’m not going to go into the environmental disaster animal production has caused, and all of the pollution and the destruction to our lands, air and water supply. But it’s huge; the # 1 polluter of our environment.

A lot of people have asked me over the years to write about why I am vegan on this blog, and I don’t, because these words are harsh, and as I have said many times before, words hurt, and words divide. We have enough division in this country and we don’t need any more, and so I hold back. But finally, I felt the need to today.

As far as health goes: before I became vegan, I was vegetarian, since I was 14. For 23 years I have not eaten an animal. For 6 years I have not swallowed their milk or eggs or cheese. I have not once had high or even remotely high blood pressure since I became vegan. My triglycerides are normal, my weight is back to normal (I was borderline obese as a vegetarian), I feel good and have energy and rarely ever have that disgusting full feeling that I used to get all the time as a vegetarian.

I base most of my life on what I have learned in Yoga and Ayurveda and Chinese Medicine, and I don’t plan on stopping any of that. What all of these ancient sciences believe is that food is health.

And what I believe, is that vegan food is the only real food we could ever eat.

So that’s my story, and I hope it resonates with some of you and I hope it doesn’t piss anyone off. And to my friend, I know you were kidding. It’s not you I’m worried about, but I hate that people think that way, and I know there’s always truth underneath every joke.

With love from your (trying not to be hippie-fake-meat-eating-animal-loving-peacemaker) vegan friend,

The last time my friend visited me in Fort Worth, I made a huge assortment of appetizers, and this was one of the dishes I served. I love Tabouli. An old coworker of mine was from Lebanon and she always stated how no one in the US knows how to make Tabouli – that Tabouli is supposed to be green – really, really green. So with her in mind, I always add way more parsley than most would. And it turns out delicious. I hope you enjoy. 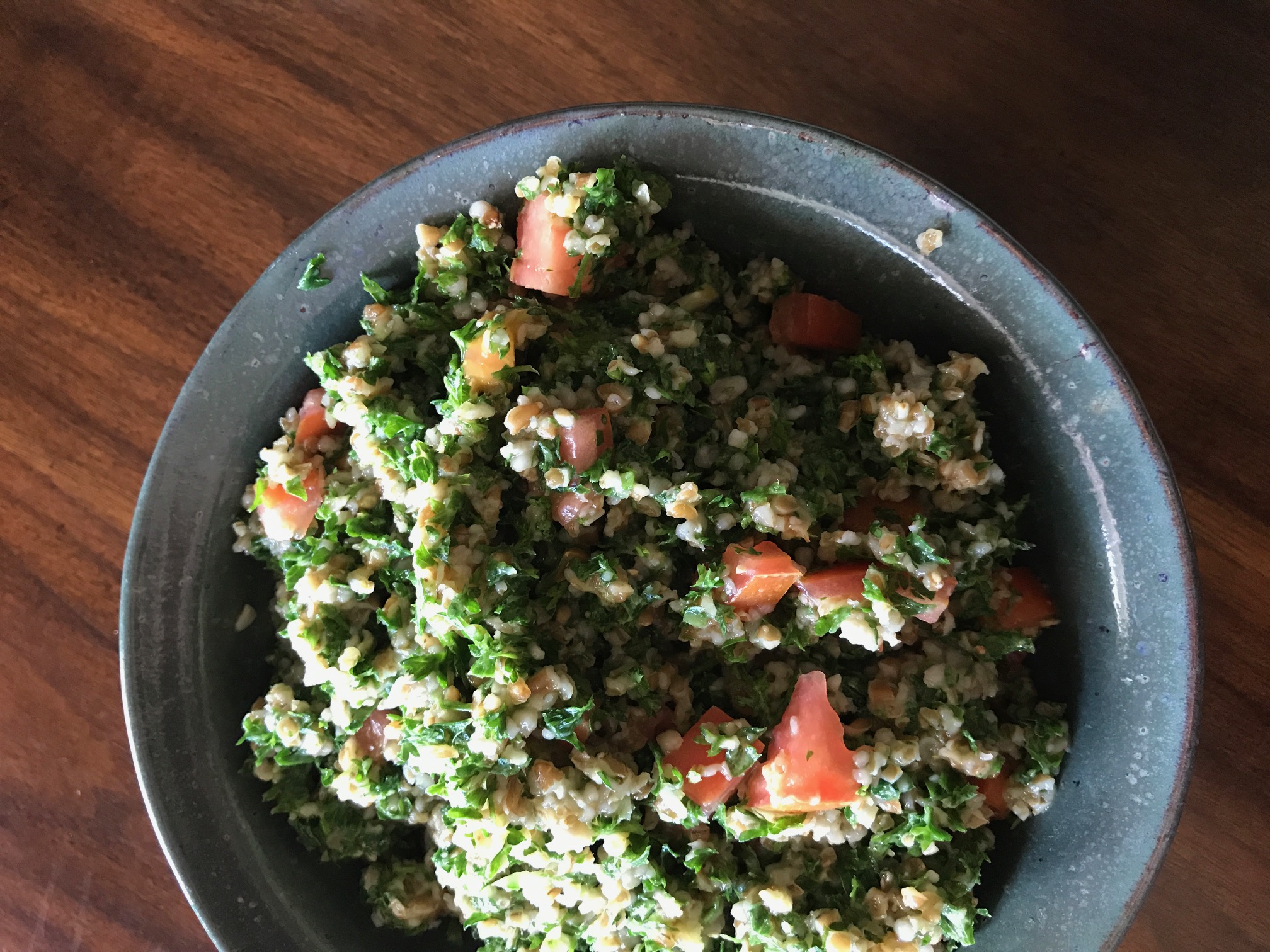 Tried this recipe?Let us know how it was!
Categories: RecipesTags: tabouli